On Monday the 29th July the Incorporated Trades held a concert for members with entertainers from the Aberdeen International Youth Festival.
Now in its 41st year the Aberdeen International Youth Festival is one of the premier arts festivals in the world. The Seven Incorporated Trades are happy to continue their sponsorship of such an important part of Aberdeen cultural activities.
The concert held in Trinity Hall commenced with a performance from Maya Tarasova, a young opera singer from St. Petersburg, Russia who has begun to make a name for herself in her home city through winning a major schools competition in 2012. This is her second visit to Aberdeen International Youth Festival and to Scotland and she is able to come here with support from the St. Petersburg forum. On her visit in 2012 she auditioned for the Royal Conservatoire of Scotland where she was well received. However, at only 16 years old she is still too young to be awarded a place at the moment but hopes to try again in the future and we wish her well in her endeavours.

A buffet meal was then followed by a prize draw with the funds raised being used as part of our charitable donations to local charities. END_OF_DOCUMENT_TOKEN_TO_BE_REPLACED

Our links with the University through our First Patron Dr William Guild are very important to us as organisation continuing our historic partnership. END_OF_DOCUMENT_TOKEN_TO_BE_REPLACED

The Bell Pull of the Monastery Bell, used in Trinity Hall at functions, was recently replaced by a new one, commissioned by the Aberdeen Sea Cadets.  Deacon Convener David N. Parkinson is shown here with one of the Sea Cadets and the Monastery Bell. 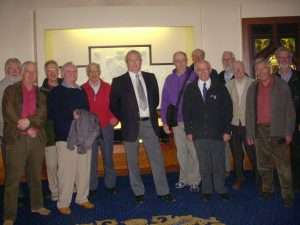 In June 2013, Deacon Convener David N Parkinson guided the Westhill Lifers around Trinity Hall, which all the gentlemen found very interesting and they were also very impressed, which caused great discussion going home in the bus.

13 Jun New Chancellor at the University

On Monday the 10th June, Dr Guilds Managers (the Deacon Convener, Master of Trades Hospital, Late Deacon Convener and the Deacons of the individual Trades) were joined by our Patron, Rev Iain Thomson, to attend the installation of Her Royal Highness the Duchess of Rothesay as Chancellor of the University of Aberdeen. Her Royal Highness succeeds Lord Wilson of Tillyorn, who stepped down at the end of December having served since 1997.
The morning event started with a procession of guests, led by a piper, University alumni, staff, students, supporters, civic dignitaries along with representatives from other Scottish universities, in attendance.
Prior to the installation as Chancellor, Her Royal Highness was awarded an honorary degree of Doctor of Law. After the installation ceremony, the new Chancellor bestowed honorary degrees on six outstanding individuals for their academic and personal achievements.

END_OF_DOCUMENT_TOKEN_TO_BE_REPLACED 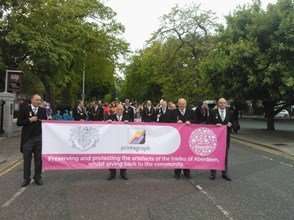 On Saturday 8th June 2013 the Incorporated Trades took part for the third year in the Celebrate Aberdeen Parade.
In supporting the charity sector the Incorporated Trades reinforce the work that has been done by them since 1587 in the City of Aberdeen to help those less fortunate. We have over the years changed from an organisation that only looked towards the wellbeing of our own membership to the benefaction of the wider community with an emphasis on youth and children’s charities based in the local area.
Not only is the charitable aspect of our voluntary work important but also the preservation of the historical links with the city and the historical and educational institutions.

END_OF_DOCUMENT_TOKEN_TO_BE_REPLACED 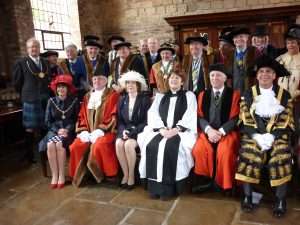 END_OF_DOCUMENT_TOKEN_TO_BE_REPLACED

After meeting at Trinity Hall for breakfast, the Deacon, Bruce Campbell, informed those present of the programme for the day. Prior to departure he asked the Deacon Convener to talk about the portrait of King William the Lyon on display in Trinity Hall.
Boarding the minibus, we then set off for Arbroath Abbey. On arrival we were given a guided tour of the Abbey buildings. Founded in 1178 for monks of the Tironensian order by King William the Lion,
King William, who died at Stirling, was buried before the high altar of the church in 1214. END_OF_DOCUMENT_TOKEN_TO_BE_REPLACED

23 May Fashion and Textiles comes to Trinity Hall

It was with pleasure that on Friday 26 April 2013 the Aberdeen Weaver Incorporation and the Seven Incorporated Trades of Aberdeen jointly hosted with The Robert Gordon University, Gray’s School of Art 2nd and 3rd Year Fashion and Textiles Degree Fashion Show. Infront of an audience of over 150 people in the magnificent surroundings of Trinity Hall the audience viewed the models showcasing a comprehensive collection of fashion items that had been designed and produced by the students from the degree course. The show itself followed a number of themes to reflect the fashion statements including tweeds, silks and tartans.

The evening started with drinks and canapés with guests being given the opportunity to catch-up with old friends and make new. Following welcome speeches from Georgina Lowen, 3rd year student from Gray’s school of Art and Deacon David Henderson of the Weaver Incorporation it was lights, cameras and action and to the back drop of pulsing beats the show began. With eight different themes displayed throughout the show the audience were given a first hand taste of the varying styles and outfits that had been designed and crafted by the students.

END_OF_DOCUMENT_TOKEN_TO_BE_REPLACED

On 26th February 2013 the Deacon Convener, David N Parkinson gave a tour round Trinity Hall to Captain Chris Smith, Naval Regional Commander Scotland & Northern Ireland. After the tour the Deacon Convener presented Captain Smith with a Gavel and Stand made on an old Drummond lathe circa 1920 from Leith Docks workshops by one of the members of the Wrights & Coopers, Alan Steele, using materials from Trinity Hall furniture off cuts.