What could possibly link Robert Gordon’s College – the Grammar School and the Seven Incorporated Trades of Aberdeen?

An unlikely conundrum but they are linked – by one person – but not recorded and perhaps not realised………until now and here is how it happened.

I was preparing to travel to Edinburgh to attend the Association’s Dinner in November 2017, my first as President, and checking that I had all that I needed for the function; Toast to Robert Gordon; President’s Speech and the President’s Badge of Office. I had been given the badge some month’s earlier when elected President but, in truth, had not looked at it. I needed to check that it was the right badge and to check how it was worn. It is a substantial gold and enamel badge of office worn with an elaborate neck chain. I turned it over and saw the engraved legend:
Presented by Former Pupil 1894 – 96
James MacPhail Massie 1948

To most seeing this, it might have told them little, but I instantly knew who this man was, indeed I had seen his photograph (taken in 1934) and so knew what he looked like and a good idea of his standing in the City.

James MacPhail Massie (b.1881) was the eldest son of James Foote MacPhail Massie who was a Director of the Northern Cooperative Society, a Director of The Equitable Aberdeen Drapers Ltd and Treasurer of the Aberdeen and Northern Friendly Society and so would have been prominent and well regarded in the City. James Jnr. only attended Gordon’s in third and fourth years and on leaving, having won competitive bursary, went to further his studies at Grays School of Art. He started his apprenticeship as a cabinet maker with his uncle John Mathieson. He must have been hardworking and skilful as on completion of his apprenticeship he was admitted to the Wrights & Coopers Incorporation on the 23rd November 1911 having “proved his craft” by making a chest of drawers, a table with a drawer and a sofa frame. Being a member of the Wrights & Coopers Incorporation was a significant step forward for him and perhaps enabled him to marry Catherine Horne Gerard in December 1911 and make their home at 3 Alford Place, with his workshop at 34 – 36, St Peter Street . Within two years their son was born and named James MacPhail Massie but was known as Hamish. Hamish began his schooling at the Grammar School in 1913.

But now the First World War intervened, and James initially served with the Territorials, and later served with the Army Service Corps in Egypt. After the war James returned to Aberdeen and restarted his career as a cabinetmaker and soon, his own business J & A Massie. Life returned to normal and his business must have progressed well as in 1930 the family moved to Carden House, Skene Street and his shop and workshop to 61 – 73 Broad Street. At this very same time, James was elected Deacon of the Wrights and Coopers Incorporation and would have been recognised, around Aberdeen, as a man of some standing.
The 1930’s was a period of some accomplishment for the Massie family as in 1931, Hamish left Grammar School and joined his father’s business. 1932 saw a further honour bestowed on James when he was elected Master of Trades Hospital of the Incorporated Trades and two years later to the highest office, Deacon Convener. James would have been constantly at functions and in the Press during these years. Recognising the privilege which he had been given by these appointments, he gifted a letter opener in the form of a small sabre with scabbard and on the scabbard is engraved his name and the dates of his appointments to these high offices. Today, it sits on the Deacon Convener’s table and is used daily to open the mail; just a few feet away is his official photograph dressed as the Deacon Convener and wearing his chain of office. His photograph sits amongst the complete collection of photographs of Deacon Conveners since photography came to Aberdeen, around 1850.
On 23 March 2018, I was a guest of the Grammar School FP’s Club at their annual dinner in the Royal Northern and University Club and seated close to their President to whom I told my story of James MacPhail Massie. She admitted that although this was her second year in office, she had not looked closely at her Badge of Office but did so now, turned to look at me; “You are never going to believe this” she said; and so my story continues……….

In 1939 ww2 broke out and Hamish was eventually called up and joined the Merchant Navy and served as 2nd Radio Officer on vessels making the dangerous but vital crossings of the Atlantic ensuring that our country continued to receive the necessary supplies to keep the population fed and our war efforts supplied. Tragically on 16th September 1941 his ship was a part of a convoy which was attacked by German U Boats and Hamish lost his life just short of his 28th birthday. 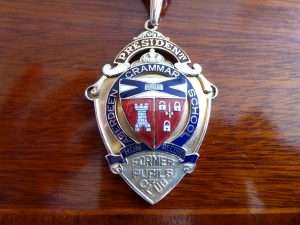 On 30th October 1947, sometime after the war had ended, James MacPhail Massie presented to the Grammar School Former Pupils Club, a President’s Badge of Office, finely crafted in gold and enamel. In making the presentation James said that he and his wife “appreciated the honour conferred on him (Hamish) by the Club’s acceptance of this token of their affection for and remembrance of a beloved son.”
The Badge is inscribed “ Commemorating James (“Hamish”) MacPhail Massie (1918 – 1931), 2nd Radio Officer, Merchant Navy, Lost in Battle of Atlantic, 16th September 1941”

Less than a year later, in June 1948, at the offices of J & A Massie, 61 – 73 Broad Street, James MacPhail Massie presented a Badge of Office to be worn by the Gordonian Association President, finely crafted in gold and enamel. In making the presentation James said that he “recollected his years at Robert Gordon’s College and affirmed that his training there had laid the foundation for his success in business and in life.” Just seven years later, in 1955 he passed away.
And so, three of Aberdeen’s most recognisable and regarded institutions are linked significantly by one man and his life in our city. As they say – it is a small world!