Stanley Jack recognised with as a Honorary Graduand

20 Jun Stanley Jack recognised with as a Honorary Graduand

The Deacon Convener and senior office bearers of the Seven Incorporated Trades attended the summer graduations at the University of Aberdeen during the week commencing the 18th June 2018. One of the highlights of this year’s ceremonies was the Graduation Ceremony on Wednesday at 3.00 p.m.

Stanley Jack, the recently retired Sacrist at the University of Aberdeen was recognised with as a Honorary Graduand with a Degree of Master of the University. 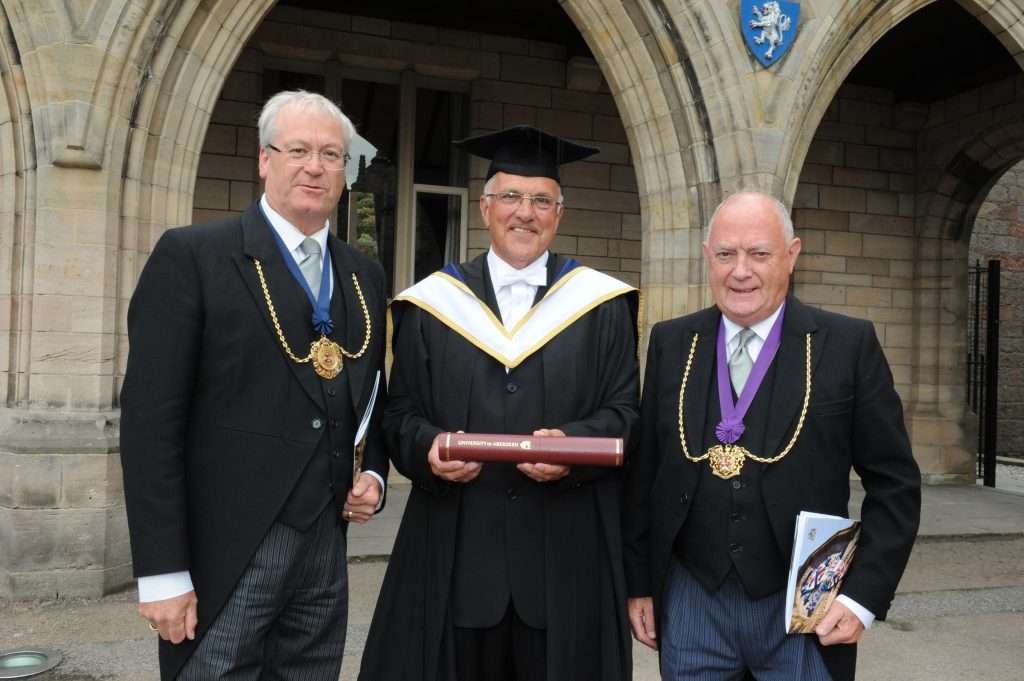 A much respected individual by both the University staff and students, Stan played a central role within the University community until he retired in 2017. In the position of Sacrist, an office which goes back to the early days of the founding of the University in 1495, his day to day role included supervision and management of all University attendants, drivers and other support staff. From the public’s point of view, the Sacrist’s role is more clearly seen during graduation ceremonies, a very important time for students and the whole University community. In a typical year, many couples will be married in the ancient King’s College Chapel with the Sacrist or his deputies officiating at each ceremony and leading the bridal party through the rehearsal. Prestigious events hosted by the University also benefited from Stan Jack’s experience and calm approach. With meticulous preparation and planning he was a champion for excellence. Prior to joining the University in 2001, Stan already had a distinguished 30 years’ service with Grampian Police.

From the viewpoint of the Office Bearers of the Incorporated Trades, Stan’s advice and calming influence assisted many a Deacon Convener when attending a Kirking Service or speaking at various at the University events.

Our best wishes are passed to Stan for a long and happy retirement with his family.