Tailors ‘Riding of the Marches’

28 Jun Tailors ‘Riding of the Marches’

Posted at 09:40h in Charity News, Tailors by 7trades 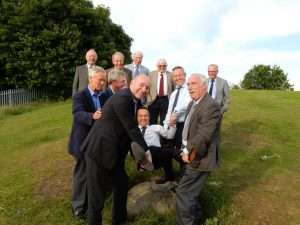 Aberdeen Tailors’ Incorporation undertook a “Riding of the Marches” on the 23rd June 2016.  This ancient ceremony was originally carried out on an annual basis but is now part of the acceptance of new members into the Tailors’ Incorporation.  The name ‘March’ derives from the 16th century meaning of a boundary and is usually indicated by stone markers.

The Tailors’ Douping stone is situated on Gallows Hill next to the Trinity Cemetery overlooking Pittodrie.