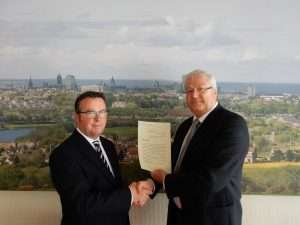 The newest member to the Aberdeen Bakers Incorporation, Alan Leith, was admitted as a Burgess of Trade on the morning of the 29th June 2016 at a ceremony in the City Council Chambers in the Towns House.

Presided over by the Lord Provost with the full Council in attendance, Late Deacon Convener David N Parkinson, standing in for Deacon Convener Sandy McKinnon, proposed Alan for admission as a free burgess of the City.

After paying the customary dues of five shillings Scots in a white purse to the Lord Provost.  Alan was presented with his Burgesses Certificate.