Posted at 09:20h in Wrights and Coopers by 7trades 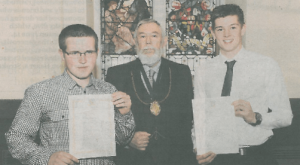 The Wrights and Coopers Incorporation hosted a special award ceremony, in Trinity Hall, to recognise and honour apprentices in their trade.

Deacon Alan Steele, presented Paul Taylor and Darren Reid with certificates.  Both young men are employed by local companies and attend North East College on a day release basis.  The Wrights and Coopers have a strong association with the College and encourage students along their journey.

Darren was named runner up in the Gordon Archibald Award, which is awarded annually in memory of Gordon Archibald, a former Deacon of the Wrights and Coopers, who died in 2007 after 54 years membership of the Incorporation.  Paul was presented with a bronze award.

Please read the full story, as featured in the Deeside Piper.