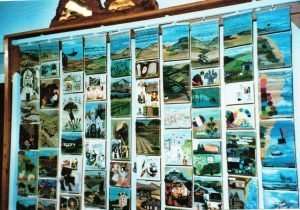 The geographical shape of the region is the most obvious feature of the design – from Elgin in Moray to Fraserburgh, and south to Stonehaven and Kincardineshire in the East.  Within this area are towns, villages and notable buildings in their approximate geographical locations.

In additions to geography, there are illustrations of the “layers” of textile history – from evidence of Pictish implements used in producing textiles, to the formation of the Guildry, to cottage industries involved in growing flax for linen and producing wool for cloth and knitted goods, and to export and import of goods from the Royal Burghs with Europe and beyond.  Later came the organisation of cottage industries by the town and city merchants, the development of “planned” villages, and with industrialisation the increased production of linen, jute, cotton and woollen and knitted goods,  This prosperous time of expansion was followed by the decline of the textile industries in the 20th Century.

The majority of the panels are of woven tapestry in wool, silk or cotton and suggest the textures and colours of the North-East.  Some of the yarns have been hand spun and some dyed with vegetable dyes, and the fabrics used are mostly handwoven and hand-dyed.  Each panel was stretched, padded and mounted on to plywood before a backing fabric was sewn into place and was then connected to the one below by handmade linen, cotton and rayon cords.  The panels are suspended in vertical columns and their positions identified by number and the letter of the column.  The beautiful wooden frame and some of the delicate wooden miniatures were made by Mr Strachan of Huntly, a good friend to the Guild.

The project will be on display at Trinity Hall at Doors Open Day, on Saturday 12th September 2015.