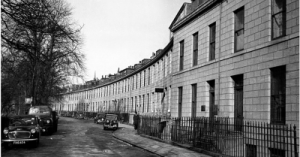 David Parkinson, Late Deacon Convener of the Seven Incorporated Trades of Aberdeen, added: “One of the guiding principles of the Seven Incorporated Trades is to support education and this is a continuation of the legacies of apprenticeships that the trades used to carry on. I think this is an evolving process – it is the first stage of a long term project that we will be looking to develop going forward. We can provide the information but don’t necessarily have the expertise to collate that information into a form that can easily be read or interpreted and that is where the help of the students is invaluable.”