Posted at 11:04h in News, Shoemakers by 7trades 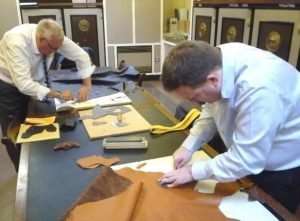 On Tuesday 14th April 2015, Mark McCue, a private banker and stockbroker and Alistair Walker, a chartered surveyor, were admitted into the Shoemakers Incorporation.
Through an Act of Parliament in 1424, craftsmen including Shoemakers were permitted for the first time, to elect a Deacon to represent the Trade. In 1520, a Seal of Cause was granted, permitting the trade to form as an Incorporation.
Potential members had to prove their worth as shoemakers by making and presenting to the Trade, a pair of shoes or boots made “by their own hands”. This is called an Essay Piece (Initially known as a Sey or Masterstick) and overseen by Essay Masters.
However, Aberdonians probably do not realise that Shoemaking as a trade has been lost to the city. The last Shoemaker, Lewis Stuart, closed his premises in Rosemount Place in 2007 after three generations.
The loss of the trade to the City was recognised as far back as the beginning of the 20th Century. The Trade needed to widen its scope in an attempt to attract new members and keep the Incorporation alive. A change of rules in 1917, 1948 and 1978 opened the trade to non-tradesmen.
Essays for new applicants were simplified. Potential members were to cut out a pair of boot or shoe uppers with all fittings. This has remained the case till the present time apart from the fittings.
Mark and Alistair join the Incorporation, which consists of Businessmen, Architects, Accountants and former members of the Emergency Services.
All have a desire to maintain the traditions of the Incorporation and keep the memory of the “Gentle Craft” in Aberdeen alive.