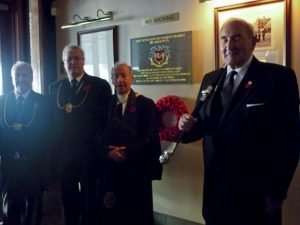 The members of the Convener Court of the Seven Incorporated Trades attended Divine Service on Sunday the 10th November 2013. After attending the Remembrance Service and wreath laying at the War Memorial outside the Cowdray Hall, the members of the Trades processed to St Nicholas Church for their Kirking Service.
Being led into the Church by Deacon Convener David N Parkinson, Master of Trades Hospital Sandy Mckinnon and Patron Rev Iain Thomson, the members of the Convener Court sat in the gallery pews during the service, the seats normally allocated to the Incorporated Trades of Aberdeen. During the service conducted by Reverend Stephen Taylor, the first reading of Scripture was given by the Deacon Convener and the second by Major P E G Carter MBE. The sermon from The Right Rev Dr Robert Gilles, Bishop of Aberdeen and Orkney, gave mention to craftsmanship and also the effect of war on the returning community.
After the Service at St Nicholas Church a short wreath laying service was carried out at Trinity Hall by the Patron of the Incorporated Trades Rev Iain Thomson, before the invited guest assembled for a buffet lunch. Representatives from all walks of life including the Armed Services were welcomed.
At the end of lunch the Deacon Convener spoke of the importance to the Trades of the Kirking.
“This historic event within the Incorporated Trades of Aberdeen, the Kirking of the Convener Court, is an important occasion for the Seven Incorporated Trades and reaffirms the commitment by our elected office bearers to serve the members of Trinity Hall, our widows and old men. During this service we asked God’s blessing on the work of newly elected officials.”
In response, the Lord Provost George Adam spoke of the importance of remembrance within the Aberdeen community and the historic links between the Council and the Convener Court. He finished by thanking the Incorporated Trades for their hospitality.