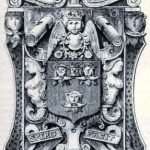 The Weavers, incorporated before 1222, belong to the oldest tradesman’s guild within the Seven Incorporated Trades of Aberdeen and were at the centre of commercial life in the burgh from those early days.

With a distinctive crest featuring the weaver’s shuttle, the craft forged an identity within the trades and together with the fullers – or dyers and listers – embraced the organisation’s principles. With strict regulation from authorities on the quality and price of members’ work, the standards of the Aberdeen weavers seldom wavered and were upheld by dedicated members.

Encroachments from tradesmen in neighbouring areas were frequently fought off through the promotion of the ethos which has served the Seven Incorporated Trades of Aberdeen for centuries.

The J Kilgour medal was presented to the Trades by a former Deacon whose family business Kilgour & Walker was synonymous with the Weaving industry in Aberdeen.  Kilgore and Walker started trading in the 1800s and continued through until the 1950s with sites throughout the city, the main factory being in Berryden Road, Aberdeen.  The company specialised in providing items of clothing and gloves for the Fishing, Farming and Granite industry.   Mr Kilgour was especially keen to promote apprenticeships in his industry and develop working skills.
The Career Enhancement Award has been awarded, along with a bursary,  since 1997, with the addition of the J Gray Kilgour medal in 2002.